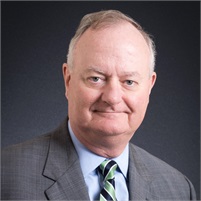 Jim is the Vice President of Investments with RockBridge Wealth Management. Jim's areas of specialty are Retirement Planning and Retirement Income Management.

Jim attended the University of Alabama and graduated from the University of South Alabama with a Bachelor of Science degree in Finance in 1981. It was in college that he first discovered his passion for investments.

Over the next 23 years with Compass Bank, Jim built his career as a highly respected financial professional, each year achieving the highest level of success among advisors of that firm. That success was instrumental in building the foundation for one of the premier retail banking investment divisions in the Southeast.

Jim’s reputation is built on honest communication with his clients and a true spirit for seeking innovative ways to help clients achieve their financial goals. Jim's client base seeks his advice and guidance on their challenging financial issues as he strives to keep their best interests in mind. Year in and year out, Jim seeks the most beneficial solutions for his clients.

Jim was born and raised in Mobile and was educated in the Catholic School system graduating from McGill Toolen Catholic High School.

Jim is married to his wife Megan and has three boys: Jack, Joseph, and Henry. Jack, 28, is a Cobb County Georgia Police Officer and a 1st Lieutenant in the Alabama National Guard. Joseph, 16, is a sophomore at Fairhope High School and is a defensive back on the football team. And Henry, 10, is a fifth grader at Fairhope Intermediate School and is a Lacrosse player. Jim also has one grandson.

Jim enjoys fishing, duck hunting, and spending time with his family. They reside in Fairhope and attend St. Lawrence Catholic Church. He and his wife have been active participants in the Cursillo movement within the Catholic Church and have worked as a presenting couple for the Catholic Engaged Encounter which seeks to give engaged couples the tools to build stronger marriages. Jim is also an active member of The Men of St. Joseph Group and he and his wife are active in Henry’s Cub Scout Pack and Joseph’s Boy Scout Troop. They are also active members of the Fairhope High School Athletics Boosters Club.